“Photography for me is a constant exploration of powerful emotions, of sensuality, of the reality around me and the dreams within.” 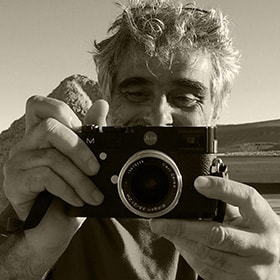 Jean-Luc is an established and renowned New York based photographer, with a long track record in fashion and a passion for landscape and portraiture. His father, Edouard Fievet, was a photographer, and of his five children, three would follow him into the profession.

Jean-Luc’s journey into photography began by recording intimate moments of his family and the families of close friends. When he moved to Paris he discovered a new world that he adopted immediately, the city. He moved to Villa Alesia street, a street that many artists have shared and still share, and embarked on a career in fashion photography. It is also In this new world that his passion for portraits was born.

His work then led him to New York, where he settled permanently. Now his images can be seen in many magazines and his portrait work has been featured in fine art exhibitions. He still enjoys capturing his family and close friends and the landscapes they inhabit, as well as the strangers in the street whose faces call to him. He captures the essence of his subjects, be they models or everyday people, strangers or close friends, without ever naming them.